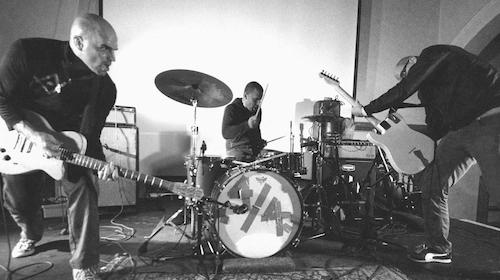 The Blind Shake are a psychedelic, garage-punk band from Minneapolis, MN. Brothers Jim and Mike Blaha play guitars and sing, while longtime friend Dave Roper plays drums. For over a decade, the track-jacketed, bald-headed trio has gained a reputation for being one of the most intense bands on the national and international tour circuit. With six full-length albums, a surf collaboration with Swami John Reis (Rocket from the Crypt/Drive Like Jehu/Hot Snakes), and three collaborations with psychedelic legend Michael Yonkers, the band continues to push the sliding scale between catchy punk songs and pitch red noise. Their “Fly Right” release (Slovenly Recordings) zooms in on an intense, yet more melodic aspect of their sound. The group has become a beloved favorite of music supervisors and agency producers, scoring featured usage with the likes of T-Mobile, Fox Racing, Specialized Bikes, Puma, Netflix House of Cards, TUMI, DirecTV, MTV, CW, Comedy Central, Oakley, Thrasher and more.

"The Minneapolis trio deliver the weight and density of an Earth riff, but married it with punk speed and bite. What's unchanging is their pure intensity.” - PITCHFORK

"The Blind Shake is at once spacey, primitive futuristic, and brutal: a kind of backyard extraterrestrial minimal surf-punk party. One guitar, one baritone guitar, a fuckload of reverb, and a drummer who deserves an Olympic medal." --SF Weekly