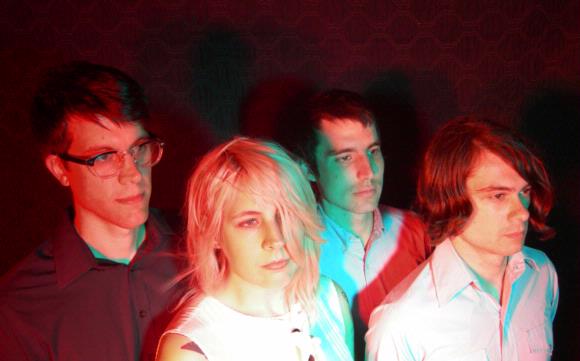 Nevermind the constant threat of a cease and desist letter, when Carrie Brownstein tells you that your band name is weak, you change it. But it isn't as simple as a name change for Philadelphia's minimal noise pop duo Reading Rainbow, significant line up additions facilitated the adoption of a new moniker. So...drum roll please...as we reintroduce Philadelphia's Bleeding Rainbow, now a full-blown, Brownstein-approved, rock quartet. The name better represents the band's evolving sound and is all around more badass and trippy as sh*t. The founding members, Sarah Everton, who moved from drums to bass to give her vocals a better chance to shine, and vocalist/guitarist Rob Garcia are now joined by Al Creedon on lead guitar and drummer Greg Frantz.

While 2010's album release Prism Eyes gained significant attention and raised the band's profile among the indie elite, even that set might not be aware of the previous self-released album Mystical Participation. If Prism Eyes is, by their own description, their attempt at writing pop songs, and Mystical Participation emphasizes an aesthetic of loud and drone-y guitars instead of focused song structure, Yeah Right, the band's third album set for release January 29th, 2013 on Kanine Records, is the merging and maturation of all these ideas and sounds.

For Yeah Right, the band has opted for a bi-polar approach to production, pushing the extremes of murky, ominous and sometimes harsh and fuzzed-out guitar onslaughts ("Pink Ruff") as well as a strong repertoire of hushed, ethereal moments ("Cover the Sky") aiming to evoke a nostalgia for 90s slacker culture without sounding bored or contrived. While previous releases reside in the reverb-soaked psychedelic pop realm, Bleeding Rainbow says, "the sound this time around was more directly influenced by bands from our teenage-hood such as Sonic Youth, My Bloody Valentine, Nirvana, Smashing Pumpkins, and Yo La Tengo to name a few." Mixing hints of Greg Sage's anthemic, anxiety-ridden punk riffs, with equal parts drone and noise swells reminiscent of Kevin Shields at his most inventive, and overlaying of boy-girl harmonies has Bleeding Rainbow channeling the Mamas and the Papas as if backed by early Smashing Pumpkins.

With the inclusion of two long time friends and supporters of the band, Bleeding Rainbow has not only freed itself from the limitations of a two-piece, but given themselves a chance to delve deeper into the mood of songs and allow for extended instrumental sections ("Drift Away"). A more collaborative songwriting approach has resulted in more complex songs, but that does not mean they are without pretty sounds or pop moments. So while Yeah Right opens up easy and welcoming ("Go Ahead"), the end will leave you feeling as if a wall of noise has permeated through your body ("Get Lost"). Bleeding Rainbow set out to create something beautiful from harsh noise, and Yeah Right succeeds wildly at doing just that.