The Builders and The Butchers 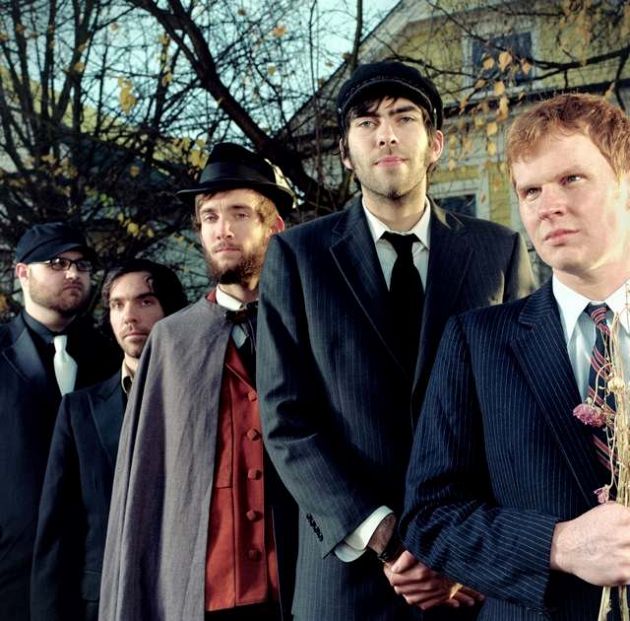 Alaska is a most unlikely origin for the five young men who comprise the Builders and the Butchers. Between 2002-2005, each of the members that would eventually form the band moved to Portland from Alaska pursuing music as a means of escaping subzero temperatures and the endless winter darkness. Soon after moving to Portland Ryan Sollee, singer songwriter and guitarist for The Builders, immersed himself in pre-1950’s American music, and started writing Southern Gothic themed story-songs “I was raised on Punk Rock but when I moved to Portland I discovered American Roots music, I felt as though there was similarities between the two styles. They are both genres that you cannot passively listen to, they almost evoke a response or an immediate reaction from you.”

It was a typical rainy Portland afternoon at Ray Rude’s house (who plays “drums” in The Builders), hanging with friends when Ryan decided to show them what he was working on. Something clicked that afternoon and within minutes everyone in attendance found something to play. Alex Ellis happened to have an old acoustic bass, and Harvey Tumbleson had borrowed a Mandolin, Ray sat down at the piano and they just started playing. Paul Seely joined the band a week later as a drummer and instrumentalist and the Builders and The Butchers were born.

Starting innocently enough as a fully acoustic rambling bunch, seeking out audiences on street corners and outside of venues, make no mistake this is not another story of busking come good, The Builders were not looking for money nor were they looking for fame, they were just playing the music they wanted to on their own terms. The band didn’t work out parts on these early songs, they were developed playing on the street, and this philosophy carries through today, by choosing to develop songs live or at rehearsal. Ryan Sollee says “Something special happens when we get in a room and try to work out a song. If I come in with a developed song it never seems to sound as good or it does not sound like The Builders.” In particular it was at these performances that Ray and Paul worked out their unique “deconstructed” drum style.

They played in the rain and cold of Portland winters until instruments were warped and broken, then one day the Builders sold out and booked a real show, then another, and crowds soon were seeking the Builders out. At the early shows it was hard to distinguish the band from the audience, nothing was mic’d or amplified, and seemingly everyone in the audience had a shaker, washboard, or were just beating on the wall and singing. All in attendance saw something special happening, a Portland audience was having fun, singing along and participating, the music demanded a celebration. Within a year, the Builders would win the Willamette Week’s “Best New Band of 2008” and Seattle Sound’s “Best Live Performers 2008” and completed supporting tours with the Helio Sequence, Brand New, Langhorne Slim, Amanda Palmer, Dax Riggs, Murder By Death and Port O’brien.

The Builders don’t pay homage to old America, they channel it. All of the basic instruments are there, acoustic bass, drum, guitar, banjo, and mandolin. They mix gospel, blues, and bluegrass and howl desperate story-songs that latch onto your brain and demand immediate attention.

The timeless sound of their songs, harkens back to a time long passed in music, but reflecting the dark times of the present. Their self-titled debut was released in 2007 and showcases the bands early raw sound. Their latest release titled “Salvation Is A Deep Dark Well” is a much more complete work showcasing the bands full potential. On Salvation, the Builders worked with producer Chris Funk from the Decemberists who brought with him a throng of expertise, patience, instruments, and some of the best musicians in Portland. Salvation record combines the immediacy of the Builders early work with more a developed songwriting, each one with its own personality and story to tell. In the vein of the Southern Gothic tales Ryan weaves stories of struggle with the usual cast of characters God, the Devil, soldiers, branches, wind, rain and hell fire. The record starts with a piano chord and an eerie wind escalating into the thunderous “Golden and Green”, stomp and grinds its way through “Devil Town” and “The Short Way Home”, to the Spanish tinged “Barcelona" and “Raise Up”, and the soaring chorus of “In The Branches”, ending with a lesson of hope in the gospel homage “The World is a Top”.

The story of “Salvation is a Deep Dark Well” is that there’s joy and celebration through the darkness, there’s light in the hardest of times, and when you reach the bottom may salvation light your way.