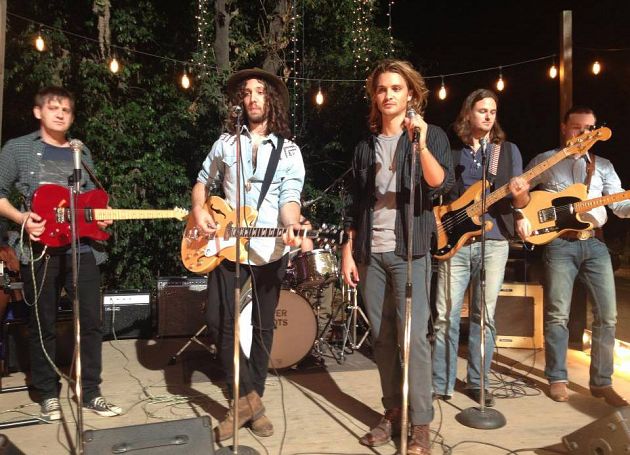 In the grandest tradition of pop, Paper Pilots' sound is intently familiar. Sitting somewhere between the worlds of contemporary indie pop and 60's British rock music, Los Angeles arrival Justin David Bocchieri sets forth to revive classic songwriting by way of lush, grandiose arrangements and illustrated by lyrical waxing worthy of dialogue banter between Ringo & Marc Bolan during Born To Boogie. Aiming for the pristine melodic heights of The Zombies' Odyssey & Oracle, or Bacharach with a sense of psychedalia ala Revolver, with the lead off track Lacksadaisical, their EP quickly moves into noisier territory through the kind of orchestrated rock inspired by early Scott Walker or Bowie and honed by The Last Shadow Puppets. The short journey touches down gently in the modern folk territory of Sondre Lerche, The Shins or even Belle & Sebastian, with the frail, but joyous crescendo of My Home. Paper Pilots debut EP features contributions from drummer Stephen Edelstein (Caught A Ghost), bassist Ryan Hailey (Orlando Napier Band), lead guitar Evan Winsor (Bluegrass band, The Get Down Boys), and a first time behind the producer's desk for John Girgus (Ex-Sarah Records Aberdeen). It was recorded and mixed with Ülysses Nöriega who has worked recently with The Wedding Present, The Mars Volta amongst many others. Musicianship shines with a production aesthetic somewhere between the golden age of the 1970s and all mod cons. '...their first single "Lacksadaiscal" (that's on purpose, that title) and the B-side "Catch the Lamplight Low" give you an idea of where they're are headed. It's someplace good.' -Buzzbands.la