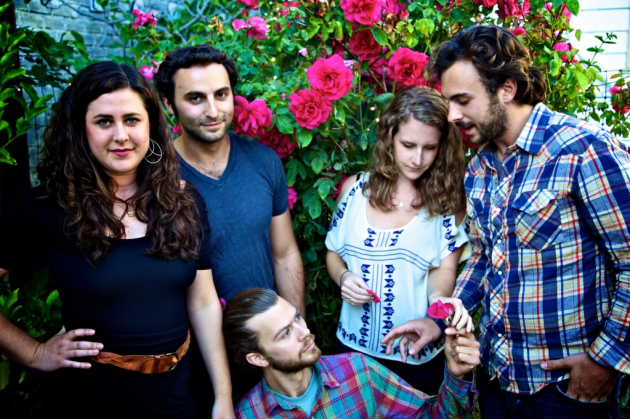 Big Tree is an indie pop quintet, conjuring up "the kind of twee-rock that follows in the footsteps of The New Seekers and The Free Design with their sweetly enchanting sound which rings both lushly produced and delightfully rag-tag DIY at the same time. A much smaller, earthier Polyphonic Spree, if you will." Born in the Big Apple, the five-piece recently relocated to sunny California, where they've quickly become a thriving element of the Bay Area music scene. The band's past three years have seen 4 cross-country tours, two full length albums, two Daytrotter Sessions, the NYC Deli Magazine Band of the Month title, and over 250 incredible shows. This environmentally-minded group gets from show to show in a tour van that runs on recycled vegetable oil, bought with the help and support of their fans.

Big Tree is still growing and expanding with the release of their second full length album This New Year. This New Year finds the band expanding on a sound that is "a difficult one to classify, but an easy one to enjoy" (Fensepost). It is infectious pop music splashed with colorful harmonies, driven by pulsing rhythms, unique time signatures, group vocals, and poetic quirky imagery. Kaila McIntyre-Bader, Anna Ghezzi, Luke Bace, Dan Pirello, and Matt Schory have been called "fiercely talented" (Prarie Dog) and "remarkably captivating" (Magnet Magazine). Growing roots on the West Coast, Big Tree is ready to defy the limits of pop music and show the world a new genre that can be enjoyed by hipsters, hippies, and mainstream masses alike.