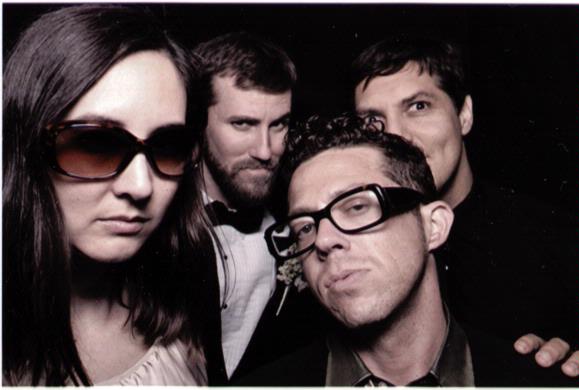 "It's somewhere between cliché and painfully appropriate to call Cardboard Lamb's debut their Singles Going Steady, but like the Buzzcocks collection, Don't Forget to Die never lets up with pop hooks and infectious riffs, almost taunting us with its effortless charm and refusal to let us take a seat. The LA-based quartet makes it sound so easy. Their debt to post-punk foundation stones like Wire, Mission of Burma, and The Sound are obvious seconds into opening track "Bedside Manner" but unlike their influences, they've hit us with a debut that comes on like slapstick black comedy, almost asking us to grin through a series of misfortunes and heartbreaking tales. The man most obviously responsible for this quality, guitarist, vocalist, lyricist, and masochist Colin Ambulance, pens lyrics that betray the tears of a clown or maybe a court jester who realizes the punch line of his next joke is his head in a guillotine basket. So how does a man with such biting wit find his perfect foil in a band that sounds so refreshingly upbeat? Cardboard Lamb rarely lose a sense of optimism, whether subtle or overblown, but always facilitating an undercurrent of simplicity, like listlessly kicking rocks while discovering the silver lining in a horizon out of Something Wicked This Way Comes. It saturates "Bedside Manner", soaking into the space between the erratic melodies criss-crossing and weaving though each other. The messy charm permeates the album and oddly runs on a faithful sense of organization within the design of Cardboard Lamb. The members of Cardboard Lamb strongly adhere to their predestined roles from song to song, never straying far from their purpose, but when it works this well, why would they ever need to? "German Judge", sounding like Joy Division on uppers, features all of the hallmarks of the band's high energy post-punk. The schizophrenic frenzy of Ambulance's serrated guitars swing between controlled tantrums of shredding and unpredictable projectile riffing while Jared Keller's bass lines anchor with a tight rhythm and guttural tone. Of course, this wouldn't be a Colin Ambulance production if the anchor provided much restraint, so Don't Forget to Die often finds Keller bouncing along beside Ambulance, like two hummingbirds on tethers, moving faster than we can process, touching down but never landing. Michelle Reeves is heavily relied on to blanket the jittery melodies in swathes of synth, never compromising the energy, rather defining the soul at the theme of the song while Tom Ackerman's instinctual beats frantically drive the song further beyond its own limit than the song itself realizes, though Cardboard Lamb doesn't keep us around for the inevitable collapse. We only get the energy. Meanwhile, Ambulance narrates the whole affair like a cartoon aghast at his own soul and even more aghast at the lack of soul in those surrounding him. Everyone is sure to have their favorite moment on Cardboard Lamb's debut, with the others not far behind. Of course, this leaves this brilliantly energetic group the unenviable task of creating a follow-up so incredible as to not immortalize Don't Forget to Die as their greatest hits." -Seth Styles